Disney has now released a brand new newscast called “Inside Disney Parks”.  This informative newscast will update you on new things happening in Disney Parks everywhere.

In this first episode of iNSIDE Disney Parks Mark and Elyse talk about the newest nighttime experiences opening Memorial Day weekend in Animal Kingdom.  Amazing things are happening after dark in this park including the tree of life awakens, Kilimanjaro Safaris after dark, Jungle Book ‘Alive with magic’ limited time show, Discovery Island Carnivale, Harambe Wildlife Party and even most of the popular attraction will be open for you to party into the nighttime hours.

In Hollywood Studios they introduce 2 of the new attractions coming to Toy Story Land, Slinky Dog Coaster and Alien Swirling Saucers.  No dates have been announced yet so stay tuned.

In Epcot May brings a visit from Dory and her friends at the Turtle Talk with Crush attraction.

Shawn Slater from Disney’s Creative Entertainment Department talks about the Force Awakening in Hollywood Studios and this summer will bring the newest fireworks show in the galaxy. “Star Wars a Galactic Spectacular” will feature new lighting, special effects, projections & of course amazing fireworks.

In Magic Kingdom Mickey’s Friendship Faire will be the show to watch in front of Cinderella’s Castle and you will be able to meet Disney’s newest princess inspired by Latin Culture.

Take a look back on the Tree of life during the ‘Vault Segment’ & even get up close & personal with a giraffe tongue as he delves into his dinner in the ‘Take you there’ finale.

Disney’s team will travel the globe each month to bring the newest news to “iNSIDE Disney Parks”.  Follow along & don’t miss a single episode

If these videos make you want to visit a Disney Park, it all starts with a free quote and NEVER any added fees.  My name is Melissa and I am a travel planner.  I myself cannot wait to see these brand new Disney experiences and would be happy to help you plan your next vacation.
Melissa, Travel Agent – Pixie Dust Adventures
http://www.PixieDustAdventures.com
Melissa@PixieDustAdventures.com

Disney announced a line-up of new attractions and entertainment coming to Walt Disney World® Resort and Disneyland®Resort during the D23 EXPO 2015.

The reimagining of Disney’s Hollywood Studios will take guests to infinity and beyond, allowing them to step into the worlds of their favorite films, starting with Toy Story Land. This new 11-acre land will transport guests into the adventurous outdoors of Andy’s backyard. Your Clients will think they’ve been shrunk to the size of Woody and Buzz as they are surrounded by oversized toys that Andy has assembled using his vivid imagination. Using toys like building blocks, plastic buckets and shovels, and game board pieces, Andy has designed the perfect setting for this land, which will include two new attractions and one expanded favorite. 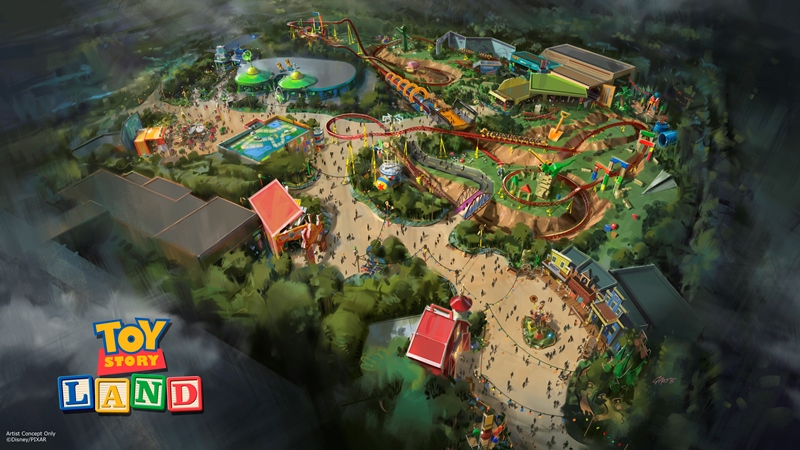 As part of the largest expansion in the park’s history, Disney’s Animal Kingdom® will immerse guests into the world of Pandora, and the entire park will transform after dark with new nighttime entertainment experiences, offering guests longer days than ever before to experience this one-of-a-kind theme park.

Soarin’ Around the World in Florida and California

Next year, Guests at Epcot® and Disney California Adventure® Park will journey to far-flung lands and fly above some of the world’s most unique natural landscapes and man-made wonders when the new Soarin’ Around the World makes its U.S. debut.

Jungle Cruise® fans can look forward to the brand-new Jungle Navigation Co., Ltd. Skipper Canteen restaurant opening in Magic Kingdom® Park late 2015. At the Jungle Skipper Canteen, Guests will be able to experience “World Famous Jungle Cuisine” in one of several unique dining rooms – including a crew mess hall and a once-hidden secret meeting room of the famed Society of Explorers and Adventurers. The restaurant will also be staffed by Jungle Cruise Skippers.

Stay tuned for more information about these new enhancements and attractions!

My name is Melissa and I am a travel agent with Main Street Adventures Travel Agency.  I look forward to personally experiencing the new attractions!  Disney Parks are now booking packages into 2016.  If you would like to plan a trip for next year, please contact me for a free, no obligation quote.